A coworker broke my 1983 Brougham that serves as my backup transportation and the starter went out in my pickup toward the waning days of harvest. I found a new one on eBay for less than half the price of one from the parts store and had it delivered to Manhattan so it would be waiting for me when I arrived. I pull started my pickup and came back, leaving my truck parked until the starter arrived on Friday. After not allowing enough time for installation, getting frustrated and doing stupid things such as raging and breaking a battery cable and fowling up my clutch linkage, I realized at 3:30pm on Friday that I wasn’t going to make my 2:00pm departure deadline for the show in Hays. I started loading my equipment in the Blazer, only to fill it up with half of the required equipment. 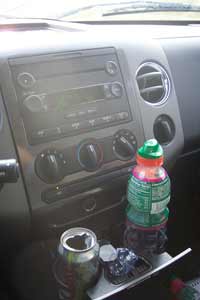 Out of options, I rented a 2005 F-150 for the last four days, blowing any possible profit from the weekend shows and then some. I took a picture of the dash, because it’ll probably be many years before I’m actually behind the wheel of something that new again.

I didn’t make Blaine’s show at the WWF, but we did get set up in time for an 11:00pm start at the Rail. It was one of the funnest shows I’ve played in a while, and a big thanks go to the Blaine Younger band for crashing my party after they got done playing down town. Blaine got up and sang a song and Mike and Johnny got up and played a few oldies with us.

The sojourn to Oklahoma was pleasant, moreso I must admit than it would have been in my pickup.

I knew it would be a good show at Ira’s in Alva, OK, when I pulled up and found everyone there already drunk and willing to help Mason and me load in. Everyone was singing along and hitting on my girlfriend while I sang on. Mason broke out the old drum solo for the finale, making me realize what a complete idiot I’ve been for not forcing him to do it more often. It’ll definately be part of our set in the future.

While we deserve to be dead in a ditch somewhere, we somehow made it back as far as Kiowa and crashed at Tyler Hiltner’s Holiday Hotel.

A big thanks to Tyler for not only being so hospitibal, but also for hooking us up with the stormy show at Dave’s. Jim’s car broke down before the show, leaving us bassless for the evening. Roger Powell, Mason’s father, set in on bass for the first half of the night, filling out the sound. We had a great response, and it looks like we’ll be back soon. The only problem with Sunday’s show was that I left my voice in Oklahoma. Josh Jacobs got up for a partial Emotional Feedback reunion on the Skynyrd songs, giving me a much needed break. The other highlight, at least for me personally, was that we got to play Rain King again. We used to play the shit out of that song; this was the first time the whole crowd was actually yelling, screaming, and dancing to it.

The pickup ended up costing $230. After the $135 bar tab that we somehow racked up at Dave’s, I don’t think I quite came close to that, much less compensation enough for gas. To top it all off, I was supposed to be able to move in to my new place on Friday; I figured I’d give the previous occupant a few extra days. We pulled in yesterday to find the room still full of stuff.
I am so crumpled emotionally and physically after these last few days that I can’t function. All I want is a place to lay my head, functioning transportation, and a few days off. With a show in Lawrence on Wednesday, a truck and a car that still aren’t fixed, and money spent on two apartments in neither of which can I currently sleep, it doesn’t look like my wishes will come true.

“The price of a memory is the memory of the sorrow it brings.” –Duritz