G said Bobbie tried to find me a girlfriend in [Waylon] Jennings. I wish I could remember. She should have tried harder.

For the record, I cleaned the carpets of the van upon our return. I also didn’t get nearly the sleep I wanted as I was driving home. Bobbie kept waking me up, offering to drive.

Seriously, Bobbie did kick ass. Bobbie, when we end up firing your husband, please stay on as tour manager…

I kid. We had a fantastic show, both Thursday and Friday. Thanks to everyone who came out to Bobby T’s, thanks to Dusty for rocking balls as always, thanks to Matt for playing the sound board, thanks to Greg for wanting us every month, and thanks to my Peavey CS800 amplifier for resigning two hours before the show during sound check and not during the show like any other amp would have done. Thanks to Midway in Kensington for the Massey Ferguson pictures, thanks to Jim for playing with us at Jennings and to the guy who claimed to be in the KKK after the show for not burning or hanging us, or whatever those hilljacks do to liberals in western Kansas.

I’m sitting here drinking and writing lines of PHP code for the Wave website. Someone at our web host changed the rules on me today. It’s like someone making a new rule and not telling me that pronouns no longer need antecedents. Our website was hosed.

My truck is still clutchless and lacking a transmission. 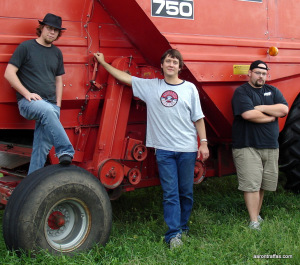 I was thinking today, as I was looking at the “Support our Troops” magnet on the side of the pickup I was driving if that meant by default to not support the war. I thought also how supporting the war was a vote against the troops. I hadn’t made that connection before today. That thought surprised me. I’m thinking more about politics these days as I recently began re-watching the West Wing, a series I watched from season 1 through 7 not six months ago. Here we go again.

I miss my family. I haven’t been to Sharon in too long, and it’ll be a while before I get to go home. We’re headed for Hays and Topeka this weekend and for Kansas City next.