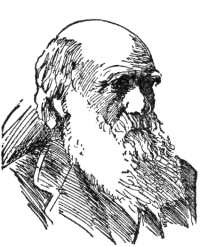 Happy Darwin Year…150 years ago (on 1 July) the theory of Natural Selection, which has held through to this day with all its modifications and improvements as any good theory does, was first presented.

Newsweek ran an article comparing Lincoln to Darwin recently, claiming that because both men were born on the same day, it was fair to ask who was more important to history. I disagree with their conclusion. Lincoln was a politician who, while arguably a very good one, is limited to the field of social constructs. At the end of the day, all we have as a population is what we know. Laws and perceptions change over time, while we can only figure something out once. Darwin figured out what is unquestionably the most important, most fundamental principle for biology and history and taxonomy.

How many times has public perception changed during the course of the last few thousand years? How many empires have risen? How many forms of government have been devised? How many fluctuations have we seen in mores? How many republics have failed?

All of the answers to the above questions are influenced, at least in part, to the sum of the knowledge of the human race. As time moves forward, we know more about the world. This accumulated knowledge, with a few exceptions, certainly molds new political ideas. Knowledge pulled us, perhaps kicking and screaming, out of the dark ages when, as the general public became more well-informed, they threw off the fetters of abstract, dogmatic teachings in favor of an empirical reality that better matched what they observed. When the church said one thing, and people observed another, the domain of the church – the unexplained – grew smaller.

Lincoln’s presidency was most definately influenced by accumulated knowledge. Had he ruled fifty years prior, things would have been very different. The field of politics, while perhaps more glamorous and favorable to a participant’s reputation and ego, is inherently limiting when referencing the question of leaving a mark on history. In a thousand years, there may not be a country – or a planet, if we keep electing Republicans – but there will still be science. We will still know about Natural Selection, undoubtedly in a more complete way than we do now, just as we will still understand and indeed know more about string theory, nuclear theory and other fundamental concepts in the world of science.

Who was more important to history? In the short term, the arguement can be made for Lincoln, though I don’t know who answers the question of history in the short term. Indeed, the correct answer for the long term is Darwin, as the theory he championed will continue to live and be refined and perfected long after the issues surrounding the presidency of Lincoln have been marginalized to the history books.