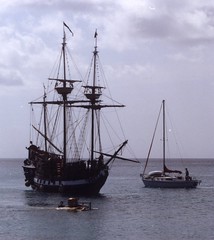 I returned today from a two-day sojourn to Kansas City. Yesterday was an all-day National Auctioneers Association Education Institute Board of Trustees meeting. Today was a joint session with us and the Board of Directors.

I’ve taken to announcing myself by saying ‘Hi’ in the style of Buzz Burbank, newsman from the old Mike O’Meara Show, which itself was formally the Don and Mike Show. In any case, yesterday during roll call I said ‘Hi’ which was mistaken by the rest of the trustees as ‘Aye’ said in the style of a pirate. It’s amazing how quickly my ‘Hi’ became ‘Arrrrrrrg’, the new way to take role in professional organizations. It may take me a while to live that down.