Newsweek’s Jacob Weisberg published an article on October 17 entitled The O’Garbage Factor: Fox News isn’t just bad. It’s un-American. In the article, he notes how ridiculously biased Fox News has been historically and how recently they’ve somehow managed to become even more so.

Fox News has quit covering news in any journalistic sense of the word. Instead, they’ve begun to actually encourage anti-administration tactics such as the September 12 March on Washingon (where a Fox News anchor was taped inciting the crowd during a report), the “tea parties” and the ruckus found in the town halls held during this summer’s recess. 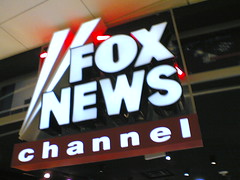 View the page on foxnews.com promoting the tea parties and tell me with a straight face that there isn’t an obscene amount of biased support for the parties. The graphic looks like a music festival poster, but instead of my favorite bands it lists my favorite right-wing news anchors.

Here’s an interesting page comparing 2 million dots with 70,000 dots, the number of people Fox and other conservative sources reported attended the September 12th march and the number of attendees that were likely really there.

Honest, civil debate is perhaps the most American value I can imagine. Think about this concept alongside the MacGuffie memo, which advocates ways to disrupt the town hall discussions of healthcare held during this summer’s congressional recess. Here’s an excerpt (by Think Progress) of one of the points.

– Try To “Rattle Him,” Not Have An Intelligent Debate: “The goal is to rattle him, get him off his prepared script and agenda. If he says something outrageous, stand up and shout out and sit right back down. Look for these opportunities before he even takes questions.”

That’s not fair or balanced. Calling it such is disingenuous.

The problem with the Newsweek article is that some have perceived it as an attack on free speech or a suggestion of censorship. The article, in fact, mentions nothing about censorship nor advocates any action by Fox News whatsoever, so I’m going to dismiss the censorship argument as a straw man.

The question about freedom of speech, however, is fundamental to the article’s interpretation. Freedom of speech is about presenting a position and advocating its merits without fearing persecution. This article does exactly that. It criticizes Fox News for its absurdly distorted “coverage” and suggests that respectable journalists simply ignore the network. Nowhere does it say that Fox News somehow doesn’t have the right to present its content. Nowhere does it say that viewers don’t have the right – or freedom – to watch Fox News.

It does say that “[t]he Australian-British-continental model of politicized media that Murdoch has applied at Fox is un-American” and I can’t help but agree. While it’s rare to find unbiased media coverage, and rarer yet to find it on cable news, the injury to our collective intelligence is that Fox News attempts to present political commentary as news, directly claiming with its “fair and balanced” slogan that it somehow presents more than just the conservative side.

Fox News has every right to present the content that they do, and nobody is saying otherwise. Every American should defend the right that Fox News has to present politically slanted content, even if that content is un-American.