We awoke on Wednesday to a little sunshine. We found some breakfast before our SCUBA class that was to begin at 9 a.m. We began with a swimming competency test, which was perhaps one of the hardest physical activities ever visited upon my body. It was only two laps in a pool, but trying too hard to finish first, combined with the fact that my swimming could only charitably be described as flopping around in the water while hoping to go in a particular direction, meant that mid-way through the final lap I was completely drained and nearly didn’t finish.

After the swim, we returned to the SCUBA office to watch a 45 minute PADI video. During the video, it began to rain and lightning, ending our hopes to dive that day.

Not having anything else planned, we embarked on the shopping tour that left at about 10:30. We were taken to the Taj Mahal shopping plaza in Ocho Rios.

There seemed to be two kinds of shops among the roughly 20 vendors in the plaza, jewelers and – for lack of a better descriptor – tourist shops. We weren’t interested much in the jewelry shops, but we quickly learned that the tourist shops had roughly the same inventory at varying prices. The average fair was collectible shot glasses, mugs, shirts, hats, carved statues, and, of course, bongs. Bongs of every shape and size. Little bongs, big bongs, bongs with penises and bongs that were shaped like penises. We bought some shot glasses and some rum for the ride home.

We finished our shopping tour after about 30 minutes, and, with an hour to spare, decided to visit the little, local restaurant on the street, where we shared an overpriced meal. It was quite good, and the scenery was nice.

When we returned to the resort, it started to rain again, which caused the water sports to be canceled, including both the snorkeling and catamaran cruise trips we were hoping to take. Since there wasn’t much else to do, we spent some time in the hot tub and then the rest of the afternoon at the swim-up bar with the friends we made in the hot tub.

We had reservations at the Bayside restaurant for 6:15. It’s a fun place with amazing food, though it was dampened, literally, by the rain blowing in the sides of the open-air restaurant that hangs out over the sea. We still had a great time, but were quite done with the day by about 8:30 when we turned in for the night. 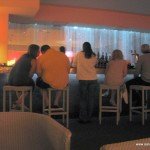 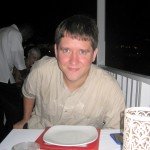 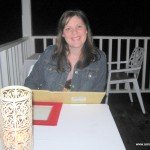 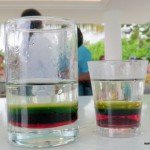 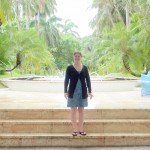 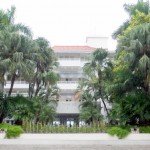 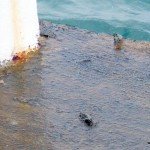 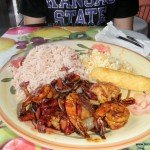 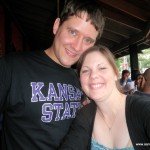 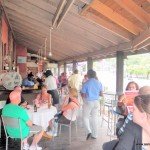 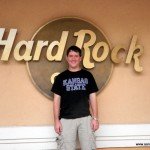