Motorola’s original Droid phone was my gateway into the world of Android and I’ve never looked back. Verizon’s released many Android phones from different manufacturers since 2009 under their Droid line, and their latest is the Motorola Droid Turbo 2. My friends at Verizon sent me an invite to watch the release announcement late last month and sent me a review unit to play with for a couple weeks.

The Droid Turbo 2 is the successor to last year’s Droid Turbo, which I found to be a very good device. The processor is faster and the battery is a little smaller. The Droid 2 has an SD card slot for additional storage, which is always a crucial feature, especially when the phone only comes with 32 GB storage.

The biggest difference between the two phones is the screen. The screen is still an organic LED display, and at 5.4 inches it’s slightly bigger than the original Turbo’s 5.2 inch screen. The new Moto ShatterShield screen is guaranteed not to crack or shatter for four years. At the October release announcement, I saw the phone dropped flat on its screen onto a cinder block from shoulder height in front of a room full of reporters. Any company brave enough to do that demonstration is confident in its new screen technology. Here’s a comparison with the Nexus 6 (left), Turbo 2 (center) and LG G3 (right). The G3 has an IPS screen, so the whites are going to be whiter than the red tint that plagues OLED screens of the Nexus 6 and the Turbo 2, but the display on the Turbo 2 is much brighter and whiter than that of the Nexus 6.

The 21 MP camera on the Turbo 2 is very good. The camera app is a little cumbersome to figure out, and the speed and picture quality in low light didn’t seem as good as the LG G4 or Samsung Galaxy S6, but it’s a good all-around shooter. The front facing camera is 5 MP and equipped with a flash. As always, I’ll have some pictures at the end of the review, but here’s a comparison between the LG G3 (left), the Droid Turbo 2 (center) and the Nexus 6 (right). I made no edits other than stitching them together, and the Turbo 2 is larger due to the larger picture size from the bigger camera. Click the collage to view or download the full size comparison.

I was honestly a little disappointed with battery life. The best feature of the original Droid Turbo was the battery that would last a day. The 3760 mAh battery on the Turbo 2 is only 3.5% smaller than the 3900 mAh battery on the original Turbo, but the processor in the Turbo 2 is much better. I’m guessing that’s why I only made it until 3 p.m. on my first day with the Turbo. Here’s a couple of screenshots showing battery use on my first day. The first shot, captured at 15% left, shows the small amount of screen time while the second shows the final duration from about 5:30 a.m. to 3 p.m.

To be fair, I didn’t make it until noon with the M9, G4 or S6, so the Turbo 2 has the best battery performance of any phone I’ve seen this year. I’m also in intermittent coverage areas on the farm, which is hard on batteries. Now that I’m back at my desk next to a 4G LTE tower, I’m seeing significantly better battery performance. The Turbo 2 also features TurboPower, a quick charging system that boasts 13 hours of battery life in 15 minutes of charge time. Better yet, it supports Qi wireless charging, which is something that’s missing from several other recently released phones from other manufacturers. I’m just disappointed there isn’t a phone on the market that will last all day playing podcasts without needing to recharge, regardless of coverage quality, but the Turbo 2 is the closest I’ve seen in 2015. 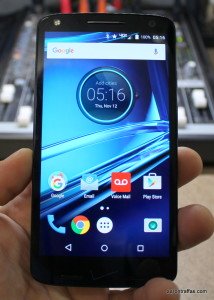 The software on the Droid 2 is excellent. Motorola’s recent phones – the Moto X and Droid Turbo – have had a very good Android experience, laced with Motorola’s custom enhancements, and the Turbo 2 follows in this tradition. Moto Voice allows you to customize the voice assistant activation phrase so you can use “talk to me, Goose” or “go go gadget” instead of the traditional “Okay, Google” phrase. The ambient notifications of Moto Display light only part of the screen to allow quick access to emails and messages without turning on the entire screen. Moto Actions are also quite convenient, allowing camera launch with a quick flip of the wrist or turning on or off the flashlight with a chopping motion. Moto Assist learns how and when you’re using the phone and adjusts phone settings accordingly.

The camera app is a little confusing, as I mentioned, and I’m not a fan of the included launcher or keyboard. Android makes these things easy to fix, as there are third party camera apps on the market and the Google Now Launcher and Swiftkey keyboard are easy to install. I was disappointed to see the Turbo 2 launch with Android 5.1.1, since Android 6 has been out for a while now, but hopefully Verizon and Motorola ship the new version sooner than later.

The Motorola Droid Turbo 2 is currently $624 from Verizon, but they’re offering up to $300 for the trade-in of an old phone, even if it’s cracked. All in all, the Droid Turbo 2 is a great phone, especially if you’re someone who is plagued with cracked or broken screens. It’s got a solid camera, a great battery compared to other phones on the market, and a screen that you don’t have to worry about breaking.

UPDATE November 18
I had some extra time with the Turbo 2 and recorded a video using the 4k 2160p setting on the camera. Here it is.