It was just over a year ago that I bought a Google Cardboard. It’s a simple virtual reality headset that’s literally made of cardboard. It has a couple lenses and a magnet, and allows you to view your phone as if it were a pair of goggles. Unfortunately, my version wasn’t the highest quality and has since broken. It was also a little too simple – the only control was looking at a specific place and sliding the magnet as a rudimentary selector.

My friends at Verizon recently let me play with Samsung’s Gear VR along with a Samsung Galaxy S7. The Gear VR operates on roughly the same concept as Cardboard – you put your phone in the goggles and it serves as the actual display – but has a much higher build quality. In addition to better hardware quality, the Gear VR includes its own app store as well as an actual touchpad.

The touchpad can work because, unlike Cardboard which just clamps any phone in the holder, the Gear VR has a plug that actually connects to the jack on supported Samsung phones. The phone is mounted in such a way that the headphone jack is accessible, and headphones are recommended for a completely immersive experience.

There are myriad free and commercial apps in the Oculus Store. Most offerings are games or short 3D movies that demonstrate the VR experience. There’s a Netflix client and even a web browser. The store itself is built to be accessed from the headset, and navigation is simple and intuitive after a short walkthrough showing how to use the touchpad.

I found the most enjoyment in the VR streams, including a live stream of the 2016 Masters. I was able to tune in and select the hole I wanted to stand on to watch the tournament in real time. While watching golf isn’t really my thing, I was really impressed with the quality of the experience.

I also watched some basketball highlights from the recent 2016 basketball season. The ability to look wherever I want without being restricted to what the camera angle is showing is a really neat experience.

The only problem I had with the usability of the Gear VR was that the strap wasn’t quite big enough for my enormous head. Because it was so tight, even after adjusting the strap to the loosest setting, it pulled the headset so close that my eyelashes kept pushing against the lenses. This inconvenience won’t be a problem for the vast majority of users, and, if I didn’t have to send the device back, I’m sure I could make some modifications that would let me use it comfortably.

The Samsung Gear VR is a great choice for anyone with a compatible Samsung phone who wants to experience VR on a headset that’s easier and more natural to navigate than Cardboard with an app and content ecosystem that, while proprietary, feels much more fleshed out. 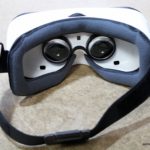 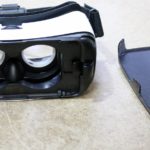