More and more, I keep thinking about the line from the beginning of The Newsroom, “If liberals are so fucking smart, how come they lose so goddamn always?”

Because we’re spineless and apathetic. We give in or stay home. We don’t do a good job of picking our battles. The battles we choose to fight last just long enough for something shiny to come into view, then it’s time to retreat to fight on the next front. The rhetoric is all about our hair being on fire, while we move from outrage to outrage, never caring enough to finish the job.

Is the problem that there are simply too many battles to fight? Are we rocked back on our heels from the whiplash generated by the shock and awe of the incompetence demonstrated in the first week of the walking conflict of interest who is our newly elected baffoon-in-chief?

Conservatives rally around five or six fundamental ideals. We scatter. Like a clowder of cats, we pick one of 60 causes to care about and join the six others who agree with us and fight really hard, but there’s just not enough of us focusing on any one issue. We get steamrolled.

We’re winning the war, if you look at long-term trends. There’s no question that the current administration is the last gasp of a party that is out of touch with the populous and on the wrong side of history. Like an old gas engine that’s been running poorly for a long time, shutting it off produces a loud backfire. That’s what the Trump administration is – the backfire explosion created from turning off the ignition on the engine that was the GOP. 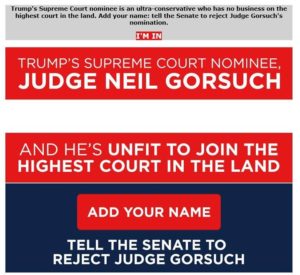 Unfortunately, instead of sitting back in the pocket and executing our offense, we’re consistently on defense. We think that if we yell loud enough, it will change minds. It works on Fox News, why shouldn’t it work with our neighbors?

Take today’s email from the feckless DNC about Supreme Court Nominee Neil Gorsuch. Instead of seeing the whole field, we’re stuck in the weeds of petty, spiteful retaliation against the horseshit Republican tactic of not confirming Garland. Would it feel good to block Gorsuch? Sure. Would it be smart? No. We could do much worse, from what I understand. It’s hard to imagine that Gorsuch could be worse than Scalia. If we blow out our voices on this fight, one that would preserve the balance of the court, then we won’t have any fuel left for the next fight, when it comes. It’s the next fight that could radically shift the balance of the court, not this one.

We have to execute from a unified playbook in order to stop it and I simply don’t see anyone calling plays.

One Response to “Scatter and succumb”