For the last three weeks, I’ve been evaluating the Samsung Galaxy Note9 from my friends over at Verizon. I’ve found a monster phone with pretty much every conceivable feature that can be crammed into a modern device. While I can always pick nits and find a few things I wish had been done differently, at the end of the day I could reasonably make the case that the Note9 is the most robust and useful smartphone currently on the market.

The best thing about the Note9 isn’t really one thing, it’s that it ticks all the boxes. Wireless charging, headphone jack, long battery life, stylus, great cameras — it’s tough to find a feature that the Note9 isn’t packing.

The integration of Samsung’s assistant Bixby is disappointing. It might be valuable to someone who doesn’t want to use the Google Assistant, but I have yet to meet someone who would pick Bixby over Google Assistant. In any case, this is a pretty small inconvenience on an otherwise outstanding device.

The first thing I noticed when I picked up the Note9 is how large and solid it feels. With a 6.4″ screen, it’s one of the largest phones I’ve ever used, but it’s not clunky. The specs are all top-of-the-line, too, which means never waiting on apps to load and plenty of space for all my photos and podcasts. The S8 and Note8 suffered from horrible placement of the fingerprint sensor. The sensor in the Note9 is placed under the rear camera. While it’s a little higher on the device than feels comfortable to me, it’s much better than last year’s devices.

While barely heavier than last year’s Note8, the capacity of the Note9’s battery is more than 20% larger. The larger battery and the improvements in Android 8 actually make it so that I can use this phone without needing an external battery. It’s a marked difference from the LG V20, my current daily driver, which needs a 10000 mAh hour battery just to get me through the day. The Note9 would consistently last me past 5 p.m. and often past 8 p.m.

I’m a sucker for wireless charging. Not only does the Note9 have wireless charging but it works really well. Even through my case, the phone charged wirelessly from roughly dead to full in under 4 hours.

Like the last several Samsung phones, the edges of the Note9 are curved. This disastrous design decision means that it’s harder to install good screen protectors. I ordered and installed a tempered glass screen protector and quickly found that the touch sensitivity had diminished substantially. I only recently learned that there’s a software setting that compensates for this issue and now wish I’d have found it sooner!

The S Pen on the Note9 has the same great accuracy and sensitivity as previous Notes, but this stylus has a Bluetooth button which can serve as a remote for the camera, presentations and audio playback.

The Note9 has two cameras on the rear and one on the front. The rear cameras are standard and telephoto. I’ve always preferred LG’s approach of including a wide-angle option instead of the telephoto, but I found plenty of instances where I appreciated having the ability to zoom.

As with all Samsung flagship phones for as long as I can remember, the camera quality is outstanding and the software is crammed with features. I’ll have a picture gallery of unedited photos at the end as always, but I really enjoyed the slow motion video function at the Kansas State Fair and at Leonardo’s Children’s Museum in Enid, Oklahoma. Here’s a compilation video of some slow motion captures.

The one issue I had when I was taking a bunch of videos at the fair was that the phone overheated. It simply got too hot and told me it wouldn’t run the camera until it cooled down.

Another camera aspect worth mentioning is low light performance. Shots taken at night with the Note9 were substantially better than those taken with my LG V20, as shown in this comparison.


It wasn’t long ago that Samsung’s software was terrible. While they continue to include some superfluous apps, they’re easy to remove or disable. After replacing the launcher with Action Launcher and the keyboard with Gboard, what’s left are Samsung’s enhancements that support the stylus and camera or are actually useful features like the touch sensitivity setting, the built-in battery optimization and the biometrics features. 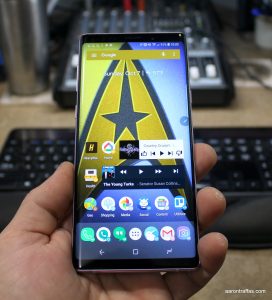 Honestly, there are so many features tucked into the Note9 that it’s extremely versatile. The Note9 is the perfect phone for a power business user who wants the best in security and carries a cable to plug the phone into a projector and use the S Pen as a presentation remote. It’s a great phone for a soccer mom who wants a big and bright display on a stylish phone that has outstanding cameras. It’s an excellent choice for a farmer who doesn’t have time to wait on apps to load, the luxury of plugging the phone into a charger during the day or the desire to worry about running out of space for podcasts.

Anyone looking for the most powerful and versatile phone on the most reliable network can’t go wrong selecting the Samsung Galaxy Note9 on Verizon. While I’ll miss the Note9 when I have to ship it back, there’s a solid chance I’ll be purchasing one as my next phone.

Gallery of example photos taken with the Note9 camera

As always, these are unedited photos straight from the camera.

Treat after the fair

Flags of the Empire practice

Nolan at the fair

Nolan in front of cover crop

Nolan getting ready to drive the boat

Nolan on the Ferris wheel

Building a teepee for Peace Treaty

Putting the rotor back in the combine