I’ve been a fan of LG phones since the G3, which I called the best phone for the farm in November of 2014. I still have mine and was using it as recently as a couple months ago when I stopped farming and switched back to my Nexus 6. Verizon sent me a G4 to review for a few weeks last spring, and I called it the perfect phone for 2015. Now I’m torn. LG’s V10, a recently released dreadnought of a phone, has got me wondering if I spoke too soon. My friends at Verizon sent one to me a few weeks ago to review, and I’ve found it to be a great size with wonderful cameras and a unique second screen that’s a refreshing innovation.

The V10 is very big, but LG knows the secret to building a big phone is to make it tall but narrow and not too thin. The V10 is actually as tall as the Nexus 6, but it’s narrower in a very good way – it feels great in the hand.

The IPS screen is beautiful. Whites are bright and white, instead of the dull off-white with a reddish tint that I notice in the OLED screens on Motorola and Samsung phones. At 5.7″, the screen is bigger than everything I’ve seen except the Nexus 6.

The most noticeable feature of the V10 is the second screen. It’s always on and shows different content depending on the context of the phone. I set it to show date and time when the primary screen is off and to show recent applications when the main screen is on. It’s an intriguing innovation to phone designs that have been relatively stagnant for years.

Like the G3 and G4, the V10’s power and volume buttons are on the back of the phone instead of the sides. This is the place where these buttons should be located – other manufacturers need to catch up.

The V10 comes with Lollipop, an older version of Android. It’s also loaded with a ton of preinstalled software from LG and Verizon. The NFL Mobile app started sending me notifications before I could even update the apps from the Google Play Store for the first time. Like most phones, it takes a while to replace the keyboard with SwiftKey and the launcher with Action Launcher 3, as well as to disable all the excess LG and Verizon apps, but it’s well worth it – the phone will run faster and longer with fewer unnecessary notifications and prompts.

LG bills the V10 as the phone for media creators. The camera on the G4 was arguably the best camera on a phone so far this year, and I think the camera on the V10 is every bit as good. It doesn’t seem quite as fast to react as the G4, which is odd since the V10 has more memory. The output of the cameras, though, is extraordinary. The front cameras – that’s right, the V10 has two front-facing cameras – are both 5 MP, but one is a standard lens and the other is a wide-angle, making it the perfect device for the selfie-obsessed. I’m not big on selfies myself, but I know I wouldn’t have been able to fit everyone in this Thanksgiving picture without the wide angle front camera. 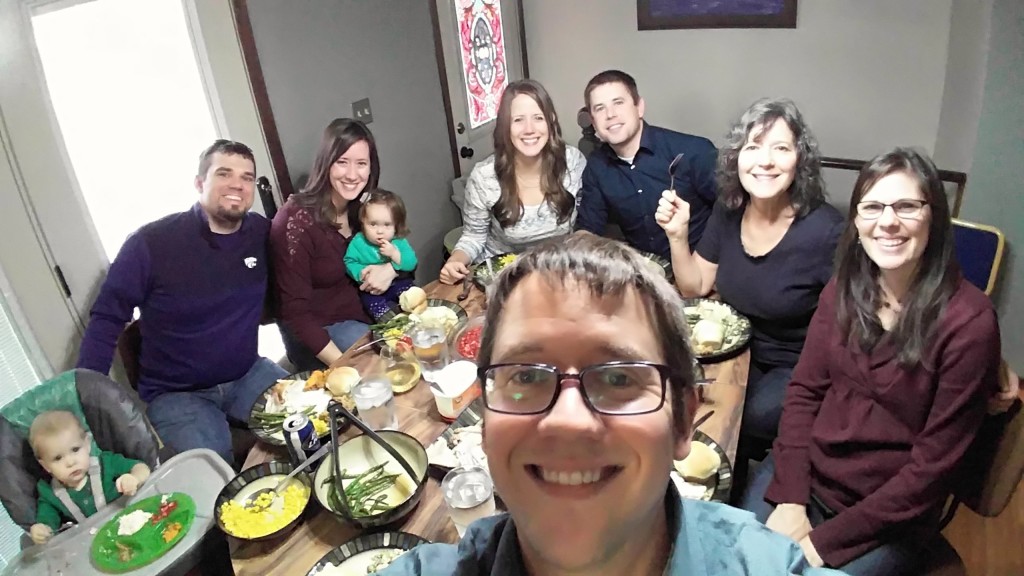 The rear camera features optical image stabilization and laser autofocus, as well as full manual controls for anyone not satisfied with automatic settings.

The UHD video is remarkable. The audio was well balanced and clear, and the video is very clean. Here’s a song called Lonely Misses Me that I recorded with the video camera. I didn’t change anything other than trim, fades and titles.

I was disappointed that there’s a limit of five minutes on the length of UHD video recordings. I don’t remember such a cap on the Droid Turbo 2, but I’ve read that other phones have similar limits.

Battery life wasn’t great, but the 3000 mAh battery on a phone that’s this fast with a screen this big means that LG wasn’t trying to win the battery longevity game. They built the phone to support Quick Charge 2, which charges the phone extremely fast. More importantly, they built the phone with a removable battery and put contacts beneath the removal battery cover to support wireless charging. I simply don’t understand why other manufacturers don’t offer these options, but I’m glad LG does.

The V10 isn’t going to be a great fit for everyone. It’s really big, and considerably more expensive than other recent phones – it’s currently $672 from Verizon. However, with specs like this, it’s understandable that it’s so much more expensive than the G4, which is $552 at the time of this writing.

Pricing aside, the cameras on the V10 are killer. They take gorgeous, high resolution pictures and videos. The screen is big enough and bright enough to see them clearly, without the off-white discoloration inherent to other screen types found in the competition. The phone is fast enough to edit the pictures – and even the UHD video – directly on the device. The wide-angle front camera makes it easy to fit everything in the shot. In short, the V10 feels like a phone built around the cameras and makes the perfect choice for someone who likes to take important pictures on the go and doesn’t want to compromise.

Photo gallery
As always, for pictures taken with the phone, I’ve done no editing. The pictures are as they were when they came off the camera. You can view the full version by downloading it from the attachment page.

Thanksgiving with the family

Going to the doctor

Christmas concert for the 4-year-old

Belt clip for the V10

Power aLG V10nd volume buttons on the back of the phone

One Response to “LG V10 on Verizon”