It’s no secret that I’m a huge fan of LG phones. I still maintain that the LG G3 combined with the Zerolemon battery is the perfect combination for farming. I’m still using it as my daily driver this summer, but only because Zerolemon doesn’t make a belt clip that works with the G4 and V10 battery upgrades. 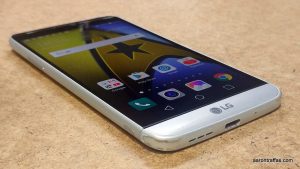 I was disappointed to hear of the changes LG made to the latest offering in its G line of devices, but I still jumped at the chance when Verizon offered to let me try out the new G5 over wheat harvest. I found a phone that takes some steps back from the features of the LG G4, but it makes one monumental leap forward – so much so that I immediately ordered one for my wife Diane.

There are four areas where I see the G5 as not as good as the G4. The G4, like the G3 before it, has volume buttons next to the power button on the center of the back of the device. It’s a design unique to LG that I’ve learned to love; the G5 keeps the power button on the back but disappointingly returns the volume rocker to the left side of the phone. 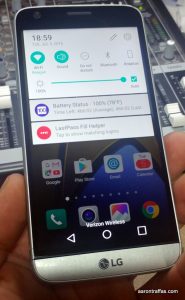 Secondly, the G5 has a slightly smaller screen. The G4 and G3 had 5.5″ screens while the G5 has a 5.3″ screen. It might not seem like much of a downgrade, but for those of us who like big screens, it’s enough to notice and to miss.

The G4, like the G3 before it and the V10 after it, featured a removable back and upgradable battery. The option to replace the paltry factory battery with an extended battery is an upgrade I’ve cherished since my Galaxy Nexus. I upgraded to Zerolemon batteries on my Galaxy Note 3 and then my LG G3. These 10,000 and 9,000 mAh batteries, respectively, would let me skip a night of charging during normal use or run from 5:30 a.m. to midnight during heavy harvest use and not have to worry about finding a mid-day charger. The G5 has a solid back. While you can replace the battery, it’s done by sliding the battery out of the bottom, which means it’s unlikely anyone will make a replacement battery that’s much bigger than the 2800 mAh factory battery. 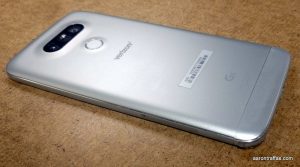 The last major area where the G5 let me down is the most important – it doesn’t support wireless charging. It’s 2016, and I don’t want to plug my phone in to charge it like an animal. The G3 and G4 each had pins under the removable back that would support the upgrade for wireless charging. While I might be able to live without volume buttons on the back or a battery that lasts past 2 p.m., I don’t know that I can go back to using a cord for charging.

With these three steps back from the G4, what feature was upgraded enough to cause me to reflexively throw money at the internet to get a G5 for Diane? The cameras. Oh, my goodness – the cameras.

The G3 and G4 had amazing cameras. The optical image stabilization and laser autofocus on my G3 kept it competing neck and neck against cameras on phones that were released a full year later. I liked the camera on the G3, released in May 2014, better than the 21 MP camera on the Droid Turbo 2 which was released in October 2015. The G4 was the first camera that gave Samsung’s flagship at the time real competition. The V10 introduced a unique second front-facing camera, one with a wide-angle lens that made taking selfies with friends or, in my case, children much easier and more fruitful.

The G5 keeps the wonderful 16 MP rear-facing camera with optical image stabilization and laser autofocus, but it also adds a second, wide-angle camera on the back. It’s tough to describe how powerful this feature is. I found that I use the wide-angle camera about twice as frequently as I use the normal camera. 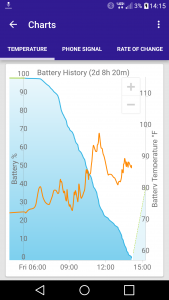 I found overall battery life to be similar to the other phones I’ve reviewed recently. Like the  S7 and PRIV, the battery on the LG G5 lasted me about 8 hours of working and podcasting. There were a few days during harvest when I left the house at 5:30 and was just hoping that the battery would last until I got done servicing the combine so I could get to a charging cable. While it’s nice that the G5 supports quick charging, speed of charge is no substitute for duration of discharge.

The G5 retains the expandable storage option. Other manufacturers have been flirting with removing the optional external SD storage, and I’m glad LG decided to keep that option. As many pictures as Diane is taking with her G5, she’d fill up the internal storage in no time if we didn’t have an SD card in her phone.

The G5 uses the new USB Type-C cable, which means that the old micro-USB cables from older phones won’t work. It’s a great cable, though, as it doesn’t matter which way the cable plugs in to the phone.

The software design aesthetic on the phone is similar to previous LG phones, with one notable exception. LG has inexplicably removed the app drawer from the launcher – every app is now on the home screen. I’m very meticulous about my home screens, and this arrangement makes me crazy just trying to think about it. Luckily, installing Action Launcher 3 is an easy fix.

LG’s big push on the design overhaul of the G5 has been to facilitate a selection of add-on devices they’re calling friends. Some friends are simple accessories, like the LG 360 CAM that I reviewed yesterday. Some are actual hardware modifications to the phone itself such as the CAM PLUS, which replaces the bottom of the phone with a thicker camera grip and supplemental battery. I understand that LG is trying to encourage third-party development of these add-ons, and I suppose it would be possible for someone to solve most of my complaints about the G5 by making a big battery friend that supports wireless charging, but I don’t have high hopes of that happening.

Knowing I’d be using the G5 during harvest, Verizon sent an Otterbox Defender case to keep the phone safe and secure. I was glad to see it didn’t suffer from the same design flaw as the Note5 Otterbox case which raised up so prominently at the top of the screen that it was hard to trigger the notification shade. I had no problems using the G5 in the case.

If it seems like I’m being overly critical of the G5, it’s because I have such an enthusiasm for LG phones and extremely high hopes for all their new releases. As it is, the G5 is still the best phone I’ve seen so far this year – Samsung’s S7 and Note5 still have the annoying physical buttons on the front and neither has a replaceable battery. The PRIV is interesting, but the specs and camera simply aren’t as good as the G5.

The LG G5 takes away some of the features I loved with the G3 and G4, but adds a killer dual camera feature. It’s a great phone for someone who doesn’t need wireless charging and loves taking pictures.

Here’s a gallery of pictures I took with the LG G5. Unedited, except in a couple cases by phone software for sharing to social media.

Family picture with the wide angle

Canola in the bin

My son must have taken the tractor hunting

Dry erase markers on the cab

Diane and the boys with new car

Lucas Maddy and the Kansas Cartel