Candidate for school board, USD 254 position 6

It’s 9:24 (as if you couldn’t tell by the timestamp affixed to this and every post) and I’m sitting here at my house waiting…I’ve got my rig set up at Fat’s and am pacing…this is going to be a wild ride…the bar’s already have full when I left to come back here…I hope Burgess is doing well in Topeka…good times, good times.

I set my alarm this morning to turn on B104.7 at 8:00. It was the first time I’ve used the radio alarm in about 6 years. Anyway, it woke me and I just about beat the bejesus out of my air hockey table. I have it propped up vertically at the foot of my bed because my roommates are poseurs and we’re cramped for room. I’ve had it there for a few months, but this is the first time I thought when I woke up that it was someone standing there with a malicious intent.

I’m sitting here waiting for Pete’s interview on the radio and they’re playing some bastardized version of Angels Among Us. As if that song wasn’t bad enough to begin with they had to throw news coverage excerpts in it and play it TWO YEARS after the fact.

Poor Pete. Man, this girl interviewing him is nutty. Trevor just called. “How did she get into radio with that voice?” It’s pretty bad. Pete is handling himself damn well, considering he’s got a fruitcake interviewing him. She asked him, “what is your primary instrument, would you say?” I know the point of an interview is to get the interviewee to explain the obvious, but that is a little too horrible for even morning radio. She keeps talking about how cute Pete is…in her kindergarten teacher voice…Pete just played Running Low on Angels…smoked it…and them. Oh my…she just said the music in Texas is “spicy, just like the food.” Jesus. Thank goodness Pete’s kicking ass…

I give McClure a lot of shit about him being rather harsh in his rambles. I logged on to his site again today, for the 9th time, and he’s posted something other than random derogatory comments…this one is worth reading…and makes me believe that there’s good in McClure yet.

I saw an old friend tonight at Fat’s…Darcy…

…and so did his concert at Abe and Jake’s in Lawrence. Burgess and I decided we didn’t want to go…then Barry and I decided that we did. Then Burgess said he’d go along. Then Barry found out that we needed a credit card to reserve tickets. He called and they had 50 left. He then left to get his mom’s credit card in Beatte. By the time he got there and called them, they were out of tickets. We decided we’re going to Fat’s and playing Pat Green on the jukebox all night. It’s actually probably going to be more fun than the concert.

“I feel sorry for people who don’t drink…when they wake up in the morning, that’s the best they’re going to feel all day.” — Bing Crosby

I watched in awe tonight as Trevor told one of the Stragglers tonight on the phone that they should buy my CD and from where it was available. Pete was gambling with Jason and the Stragglers in KC tonight and they were calling Burgess every five minutes. It was a site to see. All this after we closed down the FFFA. 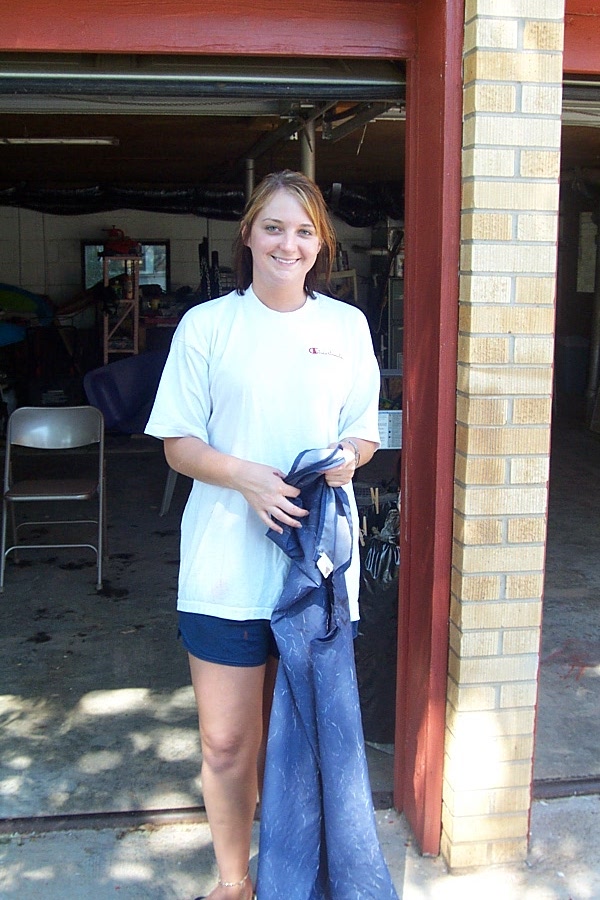 Yes, folks…that’s right….I have no hair left. None to speak of, anyway. Dawn cut all of my hair.

Pete had a good show last night. I didn’t get off the tractor at home until 7:30…had a few things to do including drive 3.5 hours back to Manhattan…didn’t make it to Rusty’s until 12:30. Still, the part of the show that I caught went very well. Thanks, Pete, for the new sticker.

Tonight will be the night off for me until Sunday. Fat’s open mic is tomorrow, Pat Green plays in Lawrence on Wednesday, Jason Boland and No Justice and Pete Gile play at Shotz on Thursday, I’m playing Fat’s with Trevor on Friday, and I have a wedding to attend on Saturday.

Well, CE is back so I don’t have to babysit anymore.

“I’m suprised he doesn’t burn stuff when he walks by.” — Greg Fletchal talking about someone.

So I just posted the long-awaited review of Pete’s new CD. It’s in the reviews section. If you don’t have this CD yet, get it.

Wayne brought me beer just as I was finishing the review. I have so much work to do with Sonar…tracking the last two shows I’ve recorded…I think I’ll just sit here and drink.

I’m headed home tomorrow…promised my friend Dawn that I’d let her do whatever she wanted to do to my hair before she moved to California. Just when it started growing out, I’m going to lose it. Knowing Dawn, I’m going to lose it all. Oh well. I have bandannas and hats.

This isn’t the best time for me to be taking a trip financially, but I have a demolition derby with which to help tomorrow. I’m worried about the Pat Green show in Lawrence on Wednesday…and Boland on Thursday. I have no way of affording either. But I have to go.

I guess this is the final version of the log. The news modules were never really used much on the front page. News can be put up manually with the bio and the remainder of the front page. After advice from Rob, it seems I will not be using Blogger’s service. I was a member for less than 24 hours and it was buggier than Kentucky ditch weed.

My scanner sucks…mainly because I’m only giving it 12 volts when it should have 15. You can see the quality in the pictures from last Tuesday’s Fat’s open mic. Liz took the pictures and I thank her for letting me borrow them. Good shots of Barry, Burgess and me.

Well, enough writing while on the clock.

“This is cooking with Kenny…”–Pete, in Stillwater, OK, at 3:00am, while cooking bacon and eggs.

Just booked a show at Busters. Rick gave me hell about the hidden track on my CD…He doesn’t like the dead time between I Drink Alone and the last song…his CD changer won’t skip and keep music rolling. I guess he gets a special edition.

I can’t believe I’m so damn poor right at the moment…too much music and not enough hours. I’ve never had such a good two weeks. I’ve realized during the past two weeks how good my friends are and how happy I am with this musical path on which we seem to have embarked seriously sometime within the last month. Thanks to everyone who’s helped me decide how serious I want to be with music (a few: Burgess, Barry, Tyler, Jim, Pete, Weedel, Liz, Darcy, Stacie, Greg, Deines, Rob).

Candidate for school board, USD 254 position 6

Only the best for my Jasper Power Stroke. It's like a Sigma Martin guitar. Also, what the hell does that date code mean? Was that air filter made in 1999 or 2021?
Family enjoying the farming.
Boys say welcome to fall!
Blast from the past day at school. It seems I must have lettered in Star Trek when I was a Cardinal!
Golden hour driving lessons with Brian
It'd be pretty tough to beat this seat!