Past Aaron was an idiot for scheduling this flight to Kentucky with two layovers. I bet I end up on a prop plane before the day is done.

I tweeted that before heading to the airport yesterday. Upon arrival at Mid-Continent, I learned my flight from ICT to ORD had been delayed, shaving my layover from a nice 30 minutes from arrival to boarding down to -10 minutes. That’s right. My flight landed in Chicago 10 minutes after my connector to St. Louis began boarding.

After the successful fat man’s sprint to the connector, I figured I was home free. A nice layover in St. Louis at the Schlafly restaurant let me fill up on their fatty fish and drink their beer. I can drink a lot of hoppy beer at an airport.

As I approached the gate to board my final flight to Owensboro, I realized something was wrong. I’d not heard of Cape Air. There’s a reason.

A local carrier that somehow found a niche serving the related areas of New England, Florida, the Caribbean and St. Louis, Cape Air flies Cessna 402s. It’s the first time I’ve been asked for my body weight when flying commercially. I got to subtract a pound or two for the sprint in Chicago.

The ride from St. Louis to Owensboro wasn’t bad, except for the constant roar. Landing at Owensboro, I learned from another passenger that the guy with the orange glow-in-the-dark pom-pom sticks on the tarmac guiding us in was also the guy who ran security and baggage check. Sure enough, after he got us our bags, he took his hat off and came out from behind the counter so I could ask him to call a taxi.

The taxi took 30 minutes to get to the airport, at which time I learned they didn’t accept credit cards. No problem, I thought. There’s an ATM in the airport.

It was out of service. The nice sole-proprietor of the airport told me there was an ATM at the hotel. I convinced the driver that I’d pay him after I got cash at the hotel, intending full well to tip handsomely for trusting me.

The lady at the hotel told me the ATM was in the bar next to the DJ booth. I turned around from the hotel desk to see the bar, entering to find a very smoky room and a 50-year old waitress dressed in a get-up that looked like something from a casino. Running to the ATM, I saw immediately that it was out of service as well.

A taxi that doesn’t take credit cards…ATMs out of service at airport and hotel. Where am I? #docHollywood

The nice lady behind the hotel desk ended up giving me a dollar to add to my seven to make the eight demanded by the driver. So much for his tip.

I finally found a way to get cash – by buying something at the IGA with my debit card and asking for cash back…and buy something I did. Dinner. And forks.

I will say that the place I presented this morning was pretty grand. RiverPark Center in Owensboro is home to not only a large music and theater venue but also to the International Bluegrass Music Museum. The view from its north side this morning around sunrise was pretty swell.

As I finish my second microwave dinner of champions, I’m thankful for in-room microwaves. I might trade it, though, for MSNBC on their cable line-up.

Though unofficial, this is my last auctioneer education trip while a member of the NAA Speakers Bureau. It’s been a fun run, allowing me to go to Minnesota, Texas, Oregon, Iowa, Louisiana, Ohio, Alabama, New Hampshire and Oregon again. Other fun locations I’ve gotten to present auctioneer content outside of the Speakers Bureau include Florida, Missouri and, now, Kentucky. I’ll miss it.

Joss Whedon is a fantastic director and created the lovable Firefly TV series, among others. It seems he’s come out in support of Willard. It’s definitely worth the 2 minutes.

Thanks to both Fro and Naomi for sharing this on the book of faces. 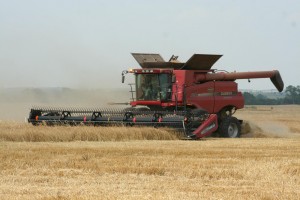 It’s been nearly three months since my father left me with the farm. It was precisely one year ago today when he saw my newborn son in the hospital. While we were watching Nolan get passed from family member to family member in the birthing suite, he told me, “You have achieved immortality.” I thought about that a lot today as I sat today for 14 hours on the tractor, stirring up as much dust as the 1/2″ we received last week would allow.

I’m learning a lot, but I don’t know that I’ll ever feel that I’m learning enough. I’m particularly disappointed with the amount of quality agricultural audio content. KFRM is chalk full of commercials and religious and family content, Audible doesn’t have much in the way of quality nonfiction related to ag in any way, and the few podcasts I’ve found are valuable but they are too few. If you have any suggestions for high level and high quality content, let me know in the comments.

A lifetime resident of Sharon, Kan., he was a farmer.

He was a member of St. Boniface Catholic Church, Sharon, Kan.

He was preceded in death by his father Vincent.

Burial will be in St. Boniface Catholic Cemetery, Sharon, Kan.

Memorials may be made to the Brian Traffas Scholarship Fund in care of the funeral home.

Condolences may be left at www.larrisonmortuary.com.

Big thanks to Eric Williams for pointing me to this video. I don’t completely accept the premise, but its interesting to think that my son may never have a print subscription of any kind.

I was in Manhattan, Kan., waiting on my truck to be serviced about two years ago when the salesman at the service station brought me a brochure. It touted the benefits of filling my tires with nitrogen. I had never heard of such a practice, so I read the entire brochure with amazement.

It seems that there are companies that market nitrogen for use in automobile tires. The language on a brochure or a website from one of these companies reads just like that from any popular pseudoscience or scam. Phrases like “amazing benefits” and “high purity” could just as easily come from a vitamin supplement company. In the first couple of above-the-fold paragraphs on the website from one such popular company, it’s explained how the high cost of this technology – generating and delivering nitrogen – has kept it out of the hands and tires of the common folk until now. Lucky us. Seems  it was the college kids with the nitrogen tanks for their kegorators who’ve had the secret this whole time.

Like any good skeptic, I’m not going to base an entire case against a product on poorly selected marketing tactics. Let’s think about what the product is trying to solve, decide if it makes sense and, if so, then decide if it’s economically viable.

The benefits for using nitrogen in tires comprise increases in fuel economy, tire life and safety.

Fuel economy
The hypothesis is that because nitrogen gas molecules are larger than those of oxygen, the natural seepage is reduced. Because lower-than-proper tire pressure has a negative impact on fuel economy, nitrogen must be better.

Tire life
The hypothesis is that the double bonds in the rubber of tires are susceptible to oxidation and that, over time, the anti-oxidants used by tire manufacturers to prevent this oxidation are degraded to the point that the oxygen in the tires begins to attack the rubber. Also, the moisture in air can cause corrosion on the rims. Because nitrogen doesn’t oxidize the rubber or corrode the wheels, nitrogen must be better.

Safety
The hypothesis is that because the expansion rate of nitrogen is less than that of air. Because varying pressures in tires can lead to problems in the consistency of handling, steering and braking, nitrogen must be better.

Under-inflated tires lowers gas mileage by 0.4 percent for every one pound of drop in pressure of all four tires. So, if you’re down by 10 pounds… you’re losing 4 percent in fuel economy… For every drop of 10° Fahrenheit in air temperature, your tires will lose one pound of pressure.

I believe that nitrogen-filled tire pressure does change with temperature, perhaps just not as much as tires filled with air. If nitrogen pressure didn’t change at all with temperature, then by this math, properly inflating your tires with nitrogen during the summer can prevent this 4% loss in fuel economy if the temperature drops 100 degrees. Or you can simply check your tires every few months and adjust the pressure accordingly.

What about leakage? Does the 20% of the air in the tires that is 3% smaller than the rest really leak out so much faster that there is a change in pressure over the course of the few months between checks? I believe it may be slightly measurable – if using a highly accurate gauge – but I don’t believe it would be noticeable or significant to either the handling or the fuel economy.

We don’t drive our cars in a pure nitrogen environment, so the outside of our tires and our wheels are constantly exposed to oxygen, moisture and other more nefarious substances. I’ve never heard of anyone who had to replace a tire or rim due to holes rusting through from the inside of the wheels. Again, I suppose that it’s something that could be measured in the lab over the course of a very long time, but the wear on the tires will cause the need for a new tire long before the anti-oxidants (if this claim is even believable) go away. Likewise, the failure of other components on the car will cause the need for a new car long before the wheels corrode to the point that they need replaced.

The biggest logical fallacy noticeable in nearly all advertising for nitrogen in tires is an argument from authority. Because NASCAR and the US military use nitrogen in their tires, we average consumers should do the same. The high performance requirements – taking a turn at 150 mph or landing a bomber on a runway – require consistent, reliable air pressure. Both the military and NASCAR have large budgets, and at these extremes the slight benefit – only a percent or two based on the math above – of the nitrogen is worth the price which they don’t really care about anyway.

In summary, tires filled with air contain roughly 21% oxygen and 78% nitrogen and small amounts of water vapor and other trace gasses. Filling tires with dry nitrogen replaces that 21% oxygen with a molecule that is 3% larger and reduces moisture inside the tire. Does this practice increase fuel efficiency, tire and rim longevity, and safety? My guess is that it may be slightly measurable but certainly not noticeable – and most definitely not worth the additional cost for anyone who properly monitors tire pressure.

What did I miss? Let me know in the comments.

I’m not sure that I fit the stereotype portrayed here just yet, but I’m noticing some disturbing trends. Thanks to Luke VanSkike for pointing me at this video.